Why Results and Motivation beat Features and Benefits

Will new technology endanger your business?

WHEN will new technology endanger your business?

If you hold to the belief that new technology does not pose a threat to your business, you are likely to suffer the same fate as Pony Express.  The most you can hope for is to go down in history as a spectacular failure.  This is unlikely to be of much comfort to you,  your shareholders or creditors.  The impact of new technology is more likely to be WHEN, not  IF.

So what lessons can we learn from the Pony Express?

Why did a young company called Reuters in London ride the same technology storm ten years earlier and flourish to become part of Thomson Reuters?  You need to scroll down to the very bottom of their company history.

The short story of Pony Express

What did the Pony Express rider cry out?

I use the expression “short story” to emphasise the short life of this company.  The entry of the State of California to the Union and the gold rush created a new opportunity to connect this new state to the rest of the US.  Two external factors caused the rapid demise of Pony Express:

There was another direct threat from new technology in the form of the intercontinental telegraph, which is now known as Western Union.The telegraph service had existed 10 years before Pony Express was founded. Riders saw telegraph lines being put up along the way, but the owners took no action.

My explanation for this is that the owners saw themselves as being in the “express pony” business. Their focus was on becoming “best of breed” – excuse the pun. This narrow view defines the business as WHAT you do and not on the WHY.  The service you offer and the reasons why you give value to your customers. In the blinkered view of the owners and managers, their focus was on what they perceived to be their direct competitors: other companies using men and horses to provide a courier service.  This blinkered view, if you excuse the second pun, led to their hasty demise.

Reuter: from carrier pigeons to multi-national

Paul Reuter was born in Germany. moved to London and founded the Reuters News Agency in Aachen, which used carrier pigeons to transfer messages between Brussels and Aachen, which was the missing link to connect Paris and Berlin. At the time carrier pigeons provided a faster service than the post train, but in 1851, the new direct telegraph link superseded carrier pigeons. This was some ten years before the demise of the Pony Express.

What lessons can we learn?

The most important lesson is the importance of how you view your company and the value you offer. The more you focus on the features of your product or service and the way to do this, the greater the chance that you will lose sight of the value you offer your customers.

You need to keep an eye out for new technology and spot major shifts, such as the way free Internet services have decimated the market  for international toll calls.

Lastly, you need to revisit the question: what business are we in? The pace of technology change is likely to become even faster.  You need to become more alert and responsive to change.

Think of your industry and the sectors you service

There are two sets of risks here. The first is the direct threat to your industry. New technology could affect your competitive advantage and in extreme cases, endanger your business.  The second is the indirect risk that the sectors you service suffer from new technology.

Print media is an excellent example and the parallels with Pony Express are uncanny.  Newspaper and printed directories, such as Yellow Pages, are well aware of the Internet, but very few companies have found ways to embrace this. The purchase of New Zealand company Trade Me by the Australian newspaper company, Fairfax Media, was a case of “if you cannot beat them, buy them”. Online platforms were decimating classified adverts, which used the be the “bread and butter” of newspapers.

Do share this post and I encourage you to respond to the caption.  There are two ways you could answer this: 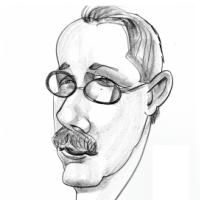